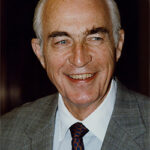 Guy G. Rutherfurd was the founding Trustee of The Achelis and Bodman Foundation and served as Board Chairman for most of the period from 1951 until his retirement in 2003. He was Chairman Emeritus at the time of his death on May 27, 2012, at the age of 96. Born in New York City on September 11, 1915, Mr. Rutherfurd was the son of Winthrop C. Rutherfurd and Alice Morton Rutherfurd – his mother who died when he was four – and of his stepmother Lucy Mercer Rutherfurd. He was the grandson of Levi P. Morton, a Governor of New York and U.S. Vice President. Mr. Rutherfurd was educated at St. Paul’s School, Princeton University, and the University of Virginia School of Law.

He married Georgette Whelan in 1938 and had four children, twelve grandchildren and five great-children. He spent most of his life in Aiken SC, Allamuchy NJ, New York City, and Fishers Island, NY. During World War II Mr. Rutherfurd was a United States Naval Officer and served as legal liaison between the Navy and the British Isles Courts. Immediately after the war he led the review by Naval Intelligence of 85 tons of top classified German Naval records for use as evidence in the Nuremberg trial of Admiral Doenitz. He was a retired Managing Partner in the law firm of Morris & McVeigh where he practiced law for over 50 years.

He served numerous New York and New Jersey institutions, including as Board Chairman of The Achelis and Bodman Foundation, the Manhattan Eye & Ear Hospital, the Buckley School, and as an active Board Member of the Dime Savings Bank of NY, the Bronx Zoo, N.Y. Aquarium, Wildlife Conservation Society, Lenox Hill Neighborhood House, and the Hackettstown National Bank.